Political consequences of independence from the Catholic Church

In order to avoid civil war between Catholics and Protestants, Catherine de Medici arranged a meeting in Poissy, inviting theologians from both sides with a view to reconciliation. However, this was not achieved as they were unable to come to an agreement and the Wars of Religion broke out the following year (1562).

A return to peace in the realm

In 1589, Henry IV was crowned King of France in Nantes. In 1598, he decreed the Edict of Nantes, which brought the Religious Wars to an end.

Protestants were now officially recognized by the king and his government together with the legal registration of their births, marriages and deaths. Public acts of worship could be held  in many places without raising opposition from the authorities.

The king stood to gain from this new situation as his authority was strengthened. Indeed, the decree was legally recognized and carried out throughout the country. The Edict of Nantes was the foundation of absolute monarchy in France.

The Treaty of Augsburg (1555) brought an end to the Religious Wars in Germany: every German state could choose between Catholicism and Protestantism. The North of Germany became Protestant while the South remained Catholic. 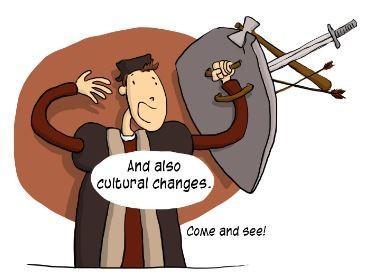 Political consequences of independence from the Catholic Church