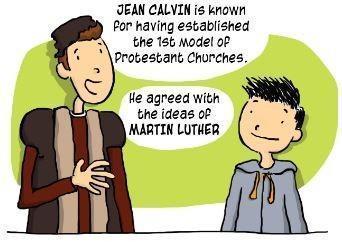 He was born in Noyon, Normandy, and first studied law and then theology. He travelled to Orléans and Bourges to study and moved in humanistic circles. The circles were in favour of a reform of the Church. Posters -called Placards– against the Mass, the Pope and the priests were posted in Paris, Orléans, Amboise and Blois, even on the door to the King’s bedroom. Repression was severe. Calvin had split from the Catholic Church just before. He fled and took refuge in Basel where he started writing his major work published in Latin in 1536: The Institutes of the Christian Religion.

From Basel to Geneva

Jean Calvin wanted to go to Strasburg. He had to stop over in Geneva because of the wars. He met Guillaume Farel, the pastor of the city who had adopted the Protestant reform. Farel asked Calvin to stay in Geneva and help him establish the Protestant Church. Calvin stayed there from 1536 to 1538. Then, as he disagreed with the city’s government, he was rejected along with Farel. They settled in Strasburg, a Protestant city, where he was a pastor from 1538 to 1541. There he married Idelette de Bure, a widow and mother of two, in 1540. A child was born in 1541, but died at an early age.

In 1540 the citizens of Geneva asked Calvin to come back. 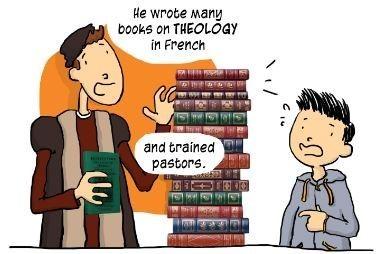 Geneva, the beacon of Protestantism

When he came back to Geneva in 1541, Calvin preached twice on a Sundays and weekly every other day. He always dealt with one book from the Bible.

In 1541, Calvin published a new version of The Institutes of the Christian Religion, but in French this time.

It was one of the first books on Protestant theology in French. Calvin’s writings were numerous, biblical commentaries, theological works, letters, etc. They were all in French, so that they were not reserved for the clergy.

Communities were set up in France, which Calvin called planted Churches. He encouraged them by sending pastors trained at the Academy in Geneva.

After 1555, Calvin’s authority in Geneva was no longer questioned. The Genovese model spread all over Europe. 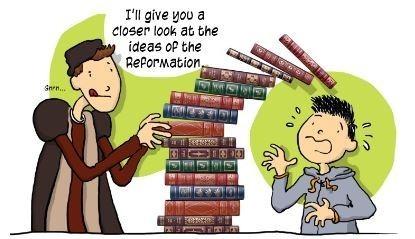