The Hottinguer bank was founded in France by Hans-Konrad Hottinger (1764-1841). It was a private bank of Zurich origin ‘Rougemont, Hottinger & Cie’ associated with Denis de Rougemont, but they separated in 1790. In 1793, he left France for the United Kingdom, where he married Eliza Redwood, the daughter of an American planter and slave-trader. When he came back to Paris, after staying in the United States and in England, he took part in founding the Banque de France, to which he was appointed regent in 1803, an office he steadily held until 1828.

In 1799, Hans-Konrad adopted the first name Jean-Conrad and added a letter ‘u’ to his family name. In 1810 he was made Baron of the Empire, a title passed on to the first born son in every generation.

For more than a hundred years, a member of the Hottinguer family has served on the Management Board of the Banque de France.

From trade bank to High Bank

In the 19th century, the Hottinguer Bank was central to the industrial and banking development  in France – the adoptive country for the Hottinguer family – and in the world.

The Hottinguer contributed to financing big companies, i.e. collieries, mines, metallurgy, canals, railways.  True to their family traditions of charity, the bank financed Protestant charity works, such as the House in Boissy-Saint-Léger in charge of training female schoolteachers, as well as the Society for the relief to wounded soldiers.

In 1818, Jean Conrad created the Caisse d’Epargne (Savings Bank) with the help of the Delessert family. Hottinguer bank also took part in creating the Compagnie générale des eaux (General water company), which later became Vivendi and then Veolia, but also in the Compagnie d’assurance Drouot (Drouot Insurance Company), that became AXA. It was part of what was then called the ‘High Bank’.

Between 1835 and 1846, the Hotinguer bank massively invested in the railways, as did the Rothschild, and in the steel industry in Belgium; it also financed the Society of Collieries and Blast Furnaces in Ougrée.

Along with the Mallet Bank, the Hottinguer created the collieries and railways Company of Epinac, in the Saône et Loire region. In 1850, it was turned into a limited company and became one of the iconic companies of the Protestant High Bank. The buildings of the mineshaft, built between 1872 and 1876, were to be listed as historical monuments in 1992. They housed a revolutionary extraction mode: a piston moving in a 558-meter-high tube, machined at Le Creusot.

With its strong American network, thanks to Jean-Henri Hottinguer (1803-1866), the Hottinguer House set up a branch in Le Havre and specialised in the international trade of cotton and colonial goods with the United-States.

In 1862, the Bank took part in creating the Ottoman Bank. In 1878, the Bank of Swiss railways was created and collected equities provided by the Paris Bank and the Netherlands Bank, the Mallet Bank, the Hottinguer family and the André family.

Fluctuat nec mergitur: the investment Bank in the 20th and 21st centuries

In 1904, the Hottinguer Bank took part, with other credit institutions, such as Mallet, Mirabaud, Neuflize, Demachy and Vernes, in the creation of the Parisian Union Bank (1904-1973).

In 1936, one member of the Hottinguer family was part of the delegation of four regents who negotiated with Raymond Poincaré, then Minister for finance, to change the statutes of the Banque de France at the time of the Front Populaire.

In 1940, the Hottinguer Bank moved and the interests of clients were hidden. Upon Henri’s death in 1943, his son Rodolphe – the president of the French association of banks to be – succeeded him. The family took part in the war effort – Jean-Conrad, a liaison officer with the American army, and later with the French Transitional Government, was commended for rendered services to France.

In 1981, Hottinguer Brothers was created in New York. In 1987, Hottinguer Capital Corp, that managed the Swiss Helvetia Fund at the time, listed on the stock-exchange. The bank settled in Geneva in 1988. In 1997, the Parisian bank was bought up by the Swiss Credit, under the name of Hottinguer Swiss Credit.

The various family branches fought over the control of the bank. In 2008, the elder branch with Henri Hottinguer (1934-2015) was the only ruler. In 2012, the bank changed from limited partnership status to limited company status. In 2012, the proposed merger with the Cramer Bank in Geneva failed. The name Hottinguer Bank was taken by an establishment created in 1989, namely the  SHR financial Society – that became the Jean-Philippe Hottinguer & Company Bank in 2007, and then the Hottinguer Bank in Paris in 2012- and joined the Hénokiens association grouping bicentennial family businesses.

Jean-Philippe, his son Jean-Conrad and his cousins are the only ones who still own a banking firm in France. They are concerned with continuing their ancestors’ work and rank among the founders of the Foundation for Protestantism. 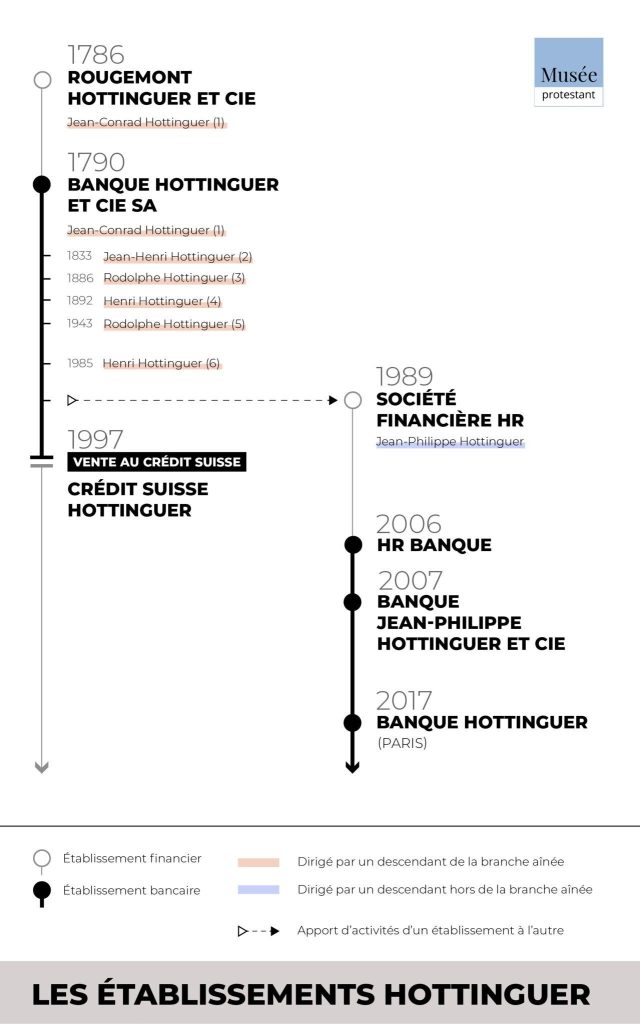