A member of a prestigious dynasty

The 1st Prince of Condé, Louis de Bourbon, was born in Vendôme in 1530. He was the youngest son of Charles IV de Bourbon descending from Louis IX (Saint Louis) and Françoise d’Alençon. Louis de Condé, the brother of Antoine de Bourbon (1518-1562), and the founder of the House of Condé was the first to be called Prince. He was an orphan and he grew up in the care of Marguerite de Navarre, then became Duke of Nevers.

His eldest son, Henri 1st of Bourbon (1522-1588) was the protector of the Southern United Provinces.

His debut as a military commander

Between 1552 and 1558, under Henri II’s reign, Louis de Condé acquired a solid reputation as a military commander. He took part in military action against Charles V, then after 1556 against Spain after Charles V’s abdication in favour of his son Philippe II. Condé successively fought in Piedmont, possession of the Duke of Savoie, then in Lorraine and in Picardie. He probably converted to Protestantism at that time. In 1558 he took part with François de Guise in the retaking of Calais that had been occupied by the English for more than two centuries.

An ambiguous role in the Conspiracy of Amboise (1560)

In 1559, upon Henri II’s death, Catherine di Medici was regent to the young King Francis II. But he was influenced by the de Guise, uncles of Queen Mary Stuart, whom he married in 1558.

In March 1560 some Protestants started scheming to kidnap the king. But the plot failed. Louis de Condé, compromised in the scheme, disavowed the conjurers and had to attend their execution in Amboise.

At the end of the same year Condé was compromised again, this time in an insurrectional Protestant movement in Bas-Languedoc. He was arrested, and some say, sentenced to death. The king’s death in December saved him. Indeed, Catherine di Medici then regent for king Charles IX wanted to get rid of the Guise influence to pursue a policy of appeasement.

The war spread throughout the kingdom, mainly in Normandy, in the South-West and South-East of the kingdom.

The Royal troops regained the initiative and besieged Rouen, then controlled by the Protestants ; During the siege Antoine de Bourbon, Louis’ brother was fatally injured.

The battle in Dreux took place between the troops of Condé and those of the Constable of  Montmorency, to the benefit of the Royal troops. Louis de Condé was taken prisoner.

In February 1563 Duke François de Guise besieged Orléans, controlled by the Protestants. He was murdered there.

Louis de Condé was freed thanks to the Peace of Amboise in 1563 granting the Protestants some religious tolerance, namely on 19 March 1563 the edict of pacification of Amboise was negotiated and signed by Condé with the Constable of Montmorency.

The growing influence of the Cardinal of Lorraine, and brother of François de Guise, on young King Charles IX prompted Condé and Coligny to leave the court and take up arms again as early as the Autumn of 1567. Louis de Condé tried to abduct the king; Charles IX was warned, foiled the attempt and went back to Paris protected by the Swiss guards. The event called the ‘Surprise of Meaux’ sparked the second War of Religion.

Condé’s army siezed Saint-Denis in November 1567 and then went on to Dreux. The battle of Saint-Denis, however, ended to the benefit of the King’s partisans, though the Constable of Montmorency was fatally injured.

After long negotiations the peace was signed on 23 March 1568, the Edict of Longjumeau which confirmed the Edict of Amboise but granted the Protestants only one stronghold: La Rochelle.

Peace did not last as the King revoked the Edict of Longjumeau with the rulings of Saint-Maur in September 1568.

Louis de Condé withdrew to Burgundy. As he felt threatened by Royal troops he joined Gaspard de Coligny in La Rochelle on 19 September.

On 13 March 1659 in Jarnac (in the Charentes region), the Royal army led by the Duke of Anjou (Henri III to be) won the fight against the Protestants. Condé was injured when he fell off his horse and tried to surrender but was executed by an officer of the Duke. 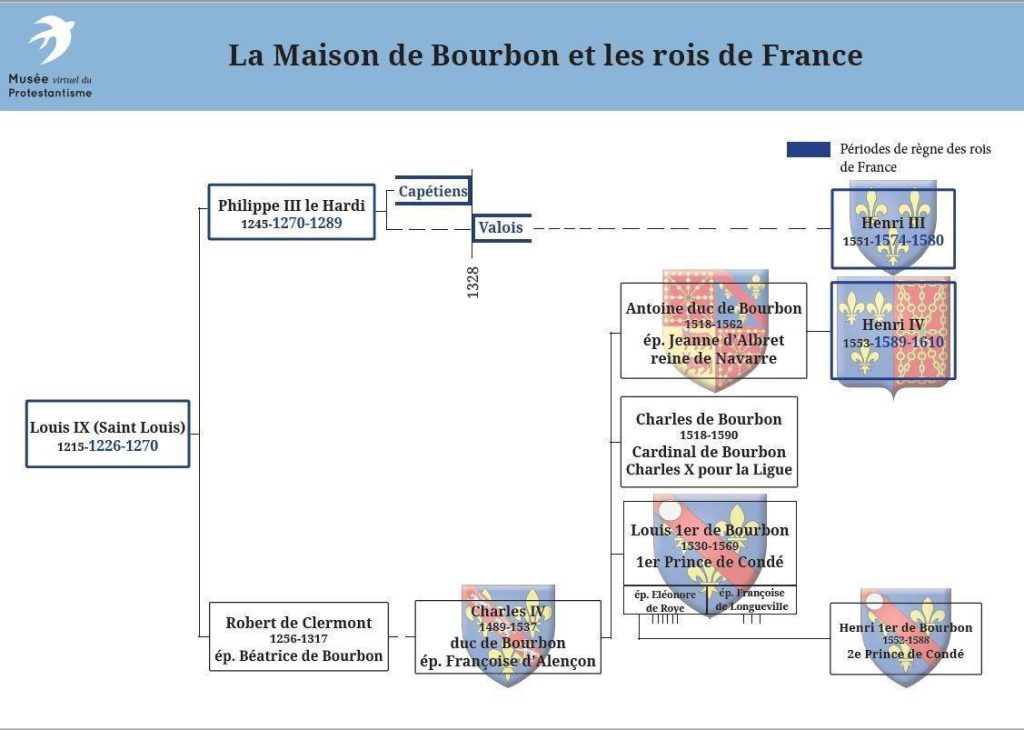